Ayutthaya is a city in Thailand, about 80 kilometers north of Bangkok. It was capital of the Kingdom of Siam, and a prosperous international trading port, from 1350 until razed by the Burmese in 1767. The ruins of the old city now form the Ayutthaya Historical Park, an archaeological site that contains palaces, Buddhist temples, monasteries and statues. 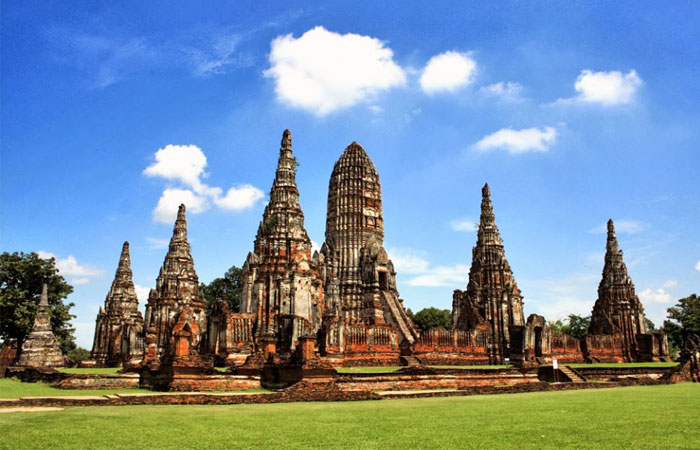 Rest on the island framed by three significant rivers: Chao Phraya, Lopburi and Pasak, the historic temples, palaces and remaining architectures of the ancient kingdom of Ayutthaya are one of Thailand’s most precious historical sites. The 715-acre area has been listed the UNESCO World  Heritage SIte since 1991 as it portrays the heydays of one of the most largest kingdoms in IndoChina history. 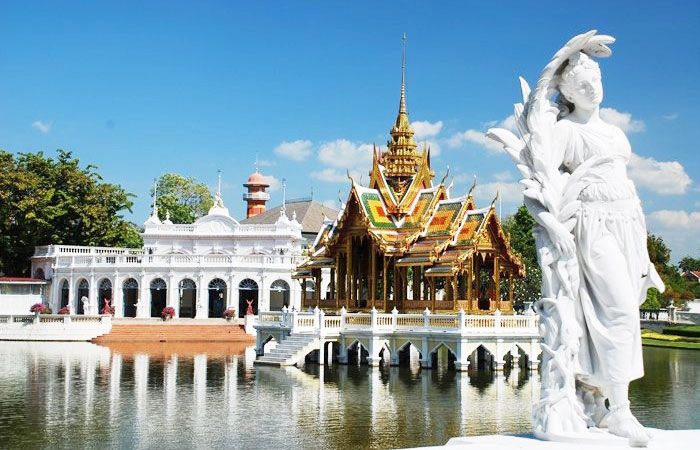 Few miles down the Chao Phraya River finds Bang Pa-in Palace, a complex of royal residences first built in around the 17th century to serve as a summer palace of Ayutthaya kings. It was later abandoned and ruined until King Mongkut (Rama IV) restored the complex. Most of the buildings we see today were ordered to build during the reign of King Chulalongkorn (Rama V), who regularly spent his summers here with his royal consorts. Each building features different architectural style: for example Wehat Chamroon Palace, the only royal residence currently open to public, was built in a traditional Chinese style with materials imported from China while Aisawan Tippaya Asna Pavilion set in the middle of the lake features traditional Thai style embedded with colorful glass mosaics. On the other side finds a monument of Queen Sunanta, King Rama V’s royal consort, and their son who were died in a boat accident. Bang Pa-in Palace is, slightly similar to the Grand Palace, divided into two zones: the outer zone for royal ceremonies and the inner zone that is reserved only for the king, his consorts and their small chikdren. 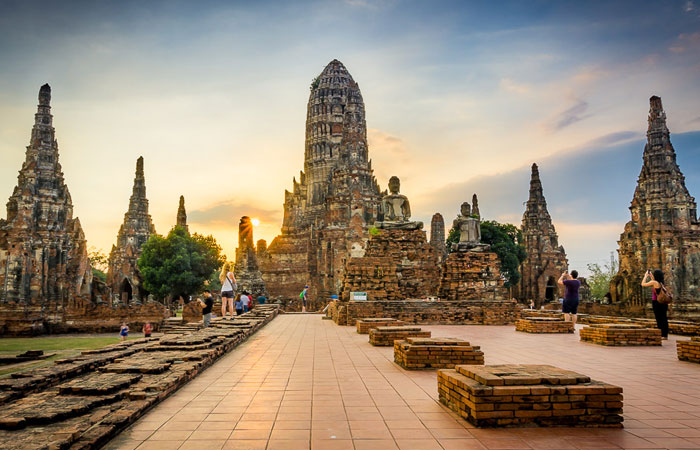 One of the most visited historical site of Ayutthaya, Wat Chaiwattanaram rests on the bank of the Chao Phraya river, to the west of the city island. The temple was ordered to built in 1630 by King Prasat Thong to honor his mother, featuring the architectural style influenced by Angkor temple in Cambodia—its unique feature is a large, central prang (Khmer-style pagoda) surrounded by smaller prangs, symbolizing Mount Sumeru, the gods’ mountain according to Hindu belief. The lighting at night makes the temple even more exotic and beautiful. 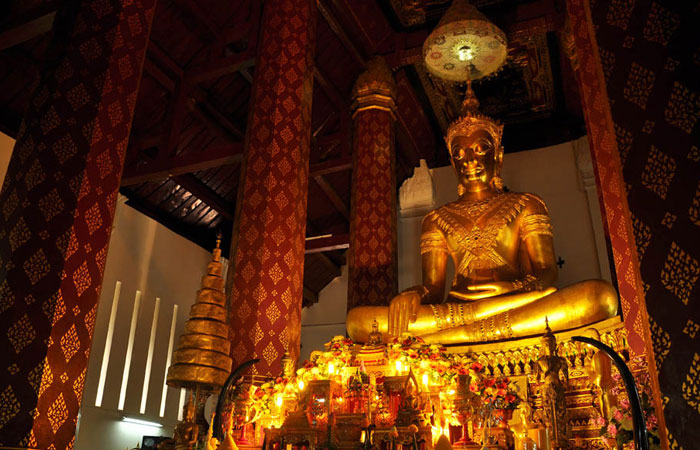 The temple is located along Khlong Sra Bua and the north bank of the Khlong Mueang or as know as Lob Buri River just opposite the ancient Grand Palace. It was received the name Wat Phra Meru Rachikaram, the old temple outside the city area. As its name indicates, it must have been established at a Royal cremation area during the later Ayutthaya period. Remarkably, this temple was not destroyed when Ayutthaya was lastly defeated by Burmese troops. Wat Na Phra Men is one of the culture heritages of Ayutthaya. This temple is perfect for those who are interested in history and archeology and a good attraction for visitors. 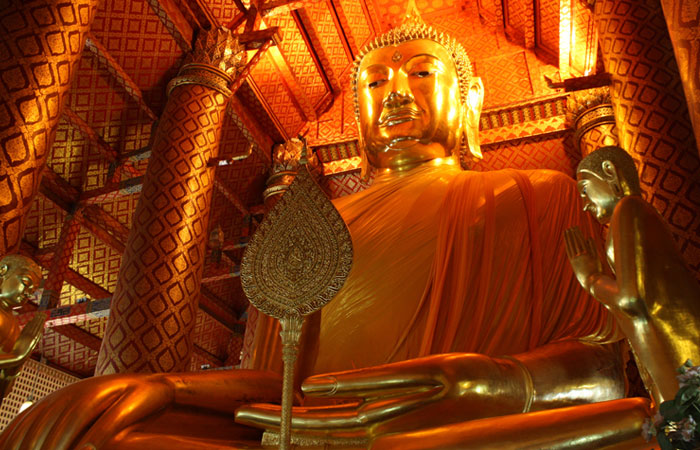 Although Wat Phanan Choeng has been built even before the establishment of Ayutthaya as the capital city, there is no clear record about its founder. According to the Northern Chronicles, Phra Chao Sai Namphung, the ruler of Ayotthaya, had it built at the royal cremation site of Phra Nang Soi Dok Mak and named the temple “Wat Phra Chao Nang Choeng” (or Wat Phra Nang Choeng)

The assembly hall (vihara) houses a majestic Buddha image cast in B.E. 1324, 26 years before the establishment of Ayutthaya. This Buddha image was formerly called “Phra Buddha Chao Phanan Choeng”, until King Rama IV renamed it “Phra Buddha Trirattana Nayok”. It was built of stucco in subduing Mara posture and was magnificently lacquered and gilt. In front of the Buddha Image are a talipot fan and 2 statues of disciples made of stucco sitting on its left- and right- hand side. The columns inside the assembly hall were decorated with red painting of Phum Khao Bin pattern. The capitals of the columns were ornamented with stucco multi-petal lotus flowers. All the 4 walls were indented to make several chambers which enshrine 84,000 small Buddha images.  The wooden front doors were craved exquisitely with Kan Khod pattern, a distinctive feature of Ayutthya Art. 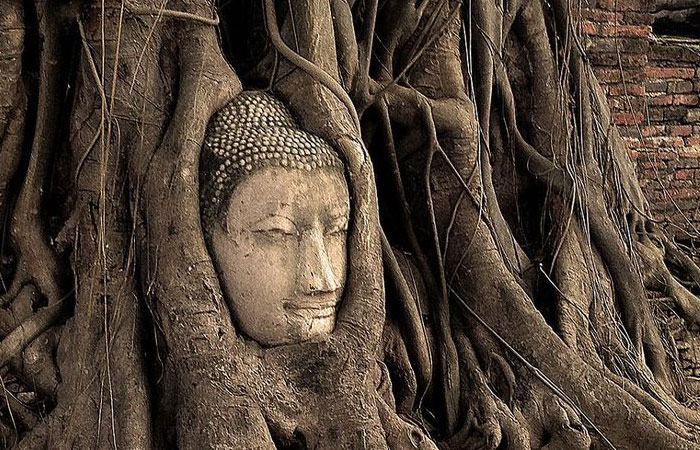 Wat Mahathat is located west of Wat Phra Sri Sanphet, at the foot of Paa Than bridge. Additionally, highlights of Wat Mahathat include the octagonal pagoda, the plaster base of a Buddha image, the medium-size Prang with mural paintings about the life of the Buddha, the resident hall of the Buddhist Supreme Patriarch and other smaller Viharas. What seems to be the most prominent landmark of the temple is the head of a sandstone Buddha image entwined in the roots of a Bodhi tree. 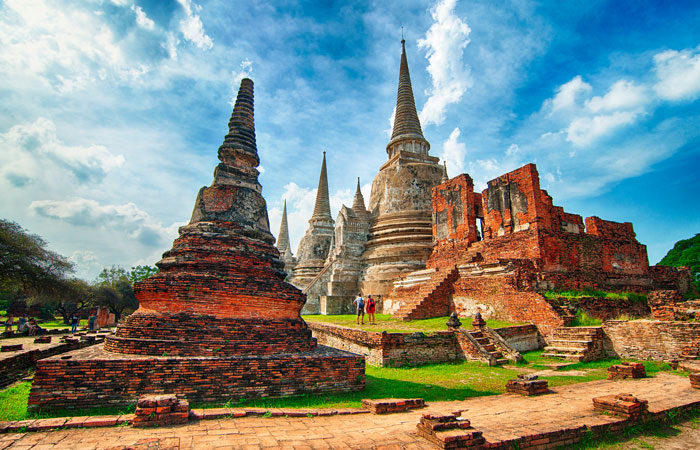 Wat Phra Sri Sanphet is located in Pratu Chai subdistrict, Phra Nakorn Si Ayutthaya district, Ayutthaya province. The temple is not only a significant historical site, but also considered as the spiritual center of Thais for a long time. Situated within the royal palace grounds, Wat Phra Sri Sanphet is the royal monastery and therefore no monk is allowed to reside at. However, the temple served to conduct ceremonies within the royal court, such as the ritual to drink an oath of allegiance. It is also regarded as an equivalence of Wat Mahathat in Sukhothai and a model for Wat Phra Sri Ratana Sasadaram (the royal temple of the Emerald Buddha) or Wat Phra Kaew in Bangkok.

Somdet Phra Ramathibodi I or King U-thong commanded the construction of his royal house in this area, but when Somdet Phra Borom Tilokkanat succeeded the throne, the king considered moving the royal palace further north and converting the piece of land into a sacred ground which later became this temple. During the reign of Ramathibodi II, an enormous Buddha image was cast. The Buddha image of “Phra Sri Sanphetdayan” is 16 meters high and its surface is coated with 143 kilograms of gold. It had been enshrined inside the assembly hall until the fall of Ayutthaya in 1767 when the Burmese invaded and melted the gilded gold away. The Buddha image was seriously damaged, so in the Rattanakosin period Phra Bat Somdet Phra Buddha Yodfa Chulaloke installed the broken core of Phra Sri Sanphetdayan in a pagoda inside Wat Phra Chetupon Vimolmangkalararm Rajvoramahaviharn in Bangkok and named the pagoda “Chedi Sri Sanphetdayan”.

Somdet Phrachaoyuhua Borommakot was the first to command the temple restoration. During the reign of Phrabat Somdet Phra Chulachomklao Chao Yuhua (King Rama V), Phraya Boran Rachathanin the regional intendant found a considerably large collection of artifacts in the underground chamber of the pagoda, for example Buddha images and gold ornaments. Later Field Marshal P. Piboonsongkram assigned a committee to renovate the ruins until the temple regained its current condition.

This royal monastery plays an important role in history of art and archeology. The remaining debris still evidently portrays how glorious the country was. At the heart of the temple, there are three adjacent Ceylonese (or bell-shaped) pagodas situated on rectangular platforms. It is believed that these platforms were the base of royal houses in the Ayutthaya period. Currently, the temple is regarded as the symbol of Ayutthaya province. 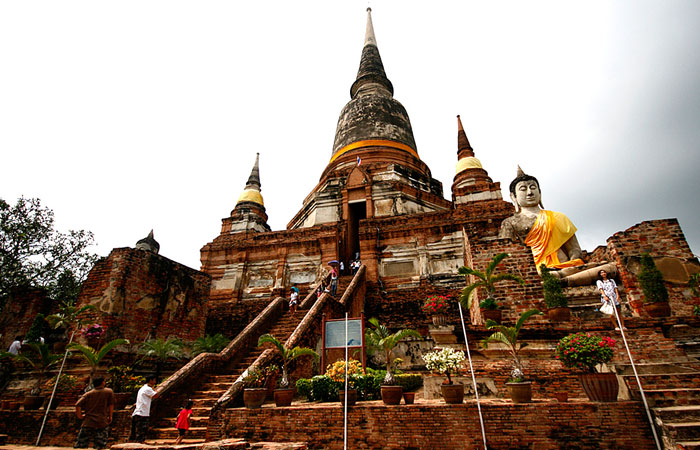 off the city island in the southeastern area of Ayutthaya in present Phai Ling Sub-district.

In the past it bears other names as Wat Pa Kaeo, Wat Chao Phraya Thai and Wat Yai

Chaiya Mongkhon. The temple was founded in the second half of the 14th century during the reign of King U Thong, first ruler of Ayutthaya. A chedi and viharn were built, the temple was named Wat Pa Kaeo. Wat Pa Kaeo became an important temple when it was made the seat of the Supreme Patriarch of the forest sect of Buddhism.The monastery got its present name after construction of the Chedi Chai Mongkhon in the late 16th century.During the Burmese invasion of 1767 the temple was largely destroyed. 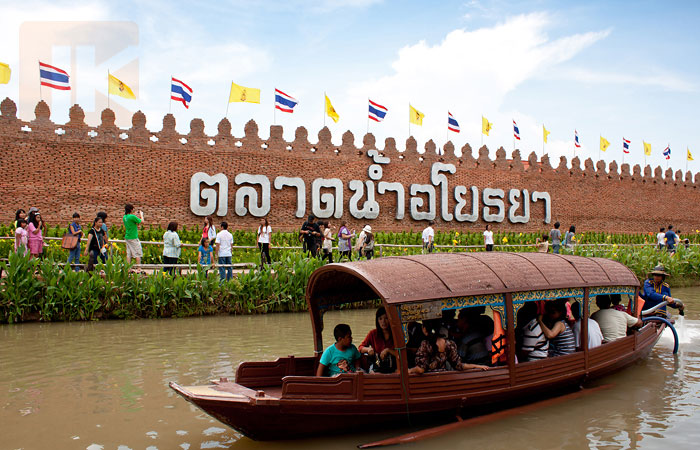 This floating market is one of the largest tourist sites in and around Ayutthaya province. The objective of this market is to help preserve and promote Thai arts and culture.