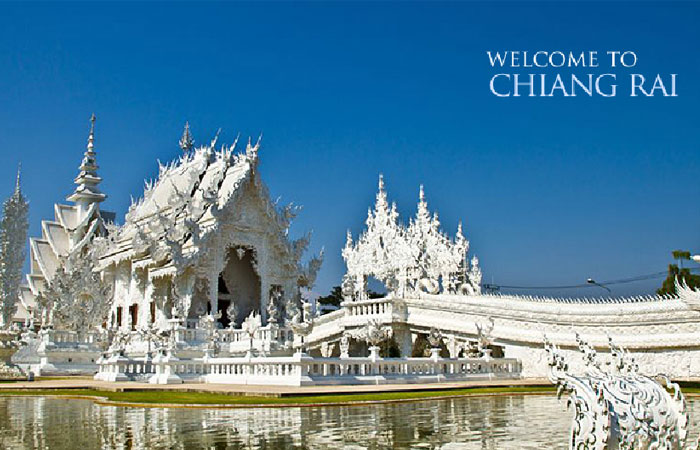 Chiang Rai is a city in northern Thailand, in the mountainous province of the same name. They city is near the borders of Laos and Myanmar (formerly Burma). Wat Phra Kaew is a royal temple that once housed the jade Emerald Buddha and now displays a replica. Nearby, the Navel City Pillar is a monument made of more than 100 Khmer-style pillars. Mae Fah Luang Art and Cultural Park is a museum showcasing Lanna artifacts. 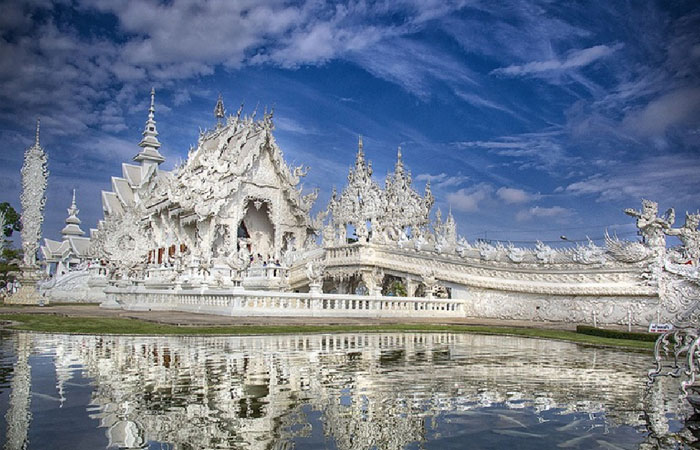 Also known as The White Temple, Wat Rong Khun is regarded as one of the most beautiful temples built in this century. A masterpiece of artist Chaloemchai Kositpipat, famed for his extravagant and unique Buddhism-related paintings, Wat Rong Khun reflects the artist’s grand visions of heaven, hell and Nirvana. The main assembly hall and adjacent area are carved in white with glass mosaics. The construction started in 1997 and even the assembly hall is not yet completed: only two walls have been painted with a depiction of heaven and hell. Look closely and you’ll see pictures of international heroes like Spiderman, Sailor Moon and even Ben 10 hidden in the murals. When it’s completed (it could take 50 years), the temple will have nine buildings. Donations are welcome but should not exceed B10,000 as Chaloemchai doesn’t want to be under the influence of big donors, even though he’s spent more than B40 million of his own cash. 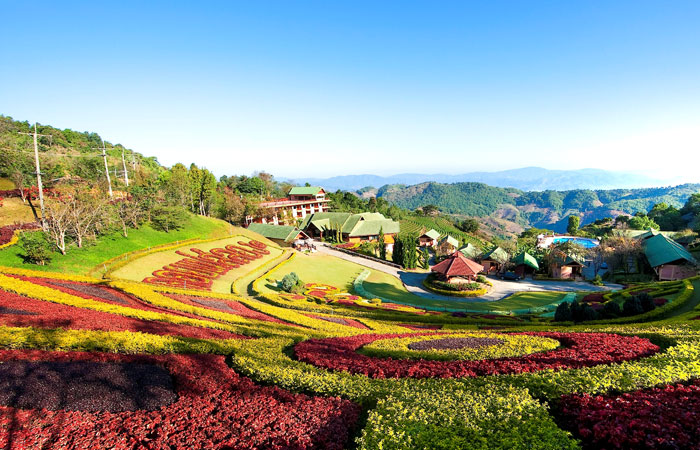 Set in the picturesque and serene hill, Doi Mae Salong was once the community of Santi Khiri, the Chinese 93rd Divisions who escaped from the political tension in Burma in 1961. Today, Doi Mae Salong has become one of the main tourist attractions in Chiang Rai, offering the succulent native Chinese cuisine, lovely houses with flowers and many plantations from fruits to coffee and tea while there are still many tribes living there. If you wish to come at the peak of the full bloom of the scenic sakuras that you enjoy while trekking, visit during December to January and there are many accommodations in small hotels and guesthouses.

How to get there: Use the Chiang Rai-Mae Chan Route and drive for about 29 kilometers then make a left turn for about 41 kilometers and you must pass a hot spring. On your way back, you can take the Routes No. 1234 and 1130 which will pass the villages of Yao and Akha tribes. Otherwise, take the Route No. 1089 to Tha Thon which is about 45 kilometers and you will find many resorts located at the starting point of Kok River. 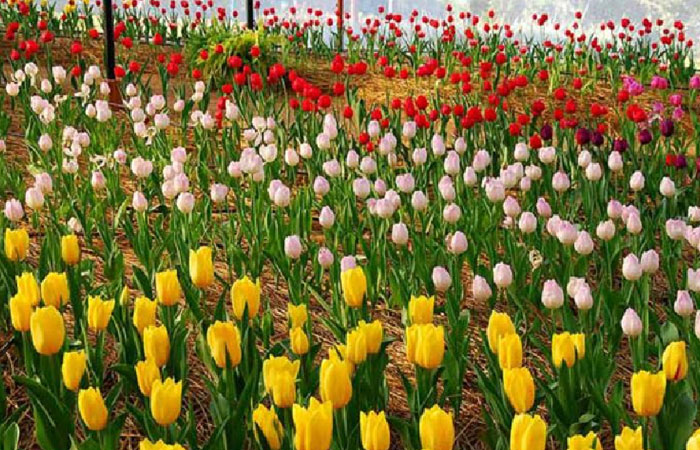 Located in Amphur Thoeng, Doi Pha Mon is at its most splendid during the winter when all visitors gather for the bed of tulips, red salvia, poinsettias, lilies, to name a few. If you depart from the city, get on the Highways No. 1020 and then 1155, which will take about 2.5 hours. 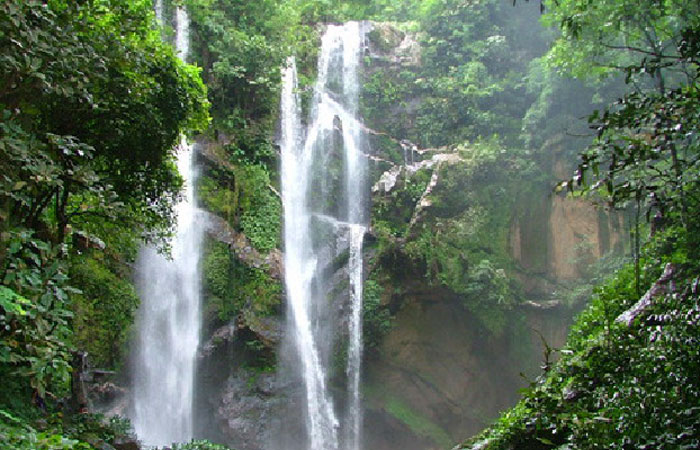 “Doi Mok” is located in Wiangpapao and was once well-known because of its cassiterite and scheelite mimeral mine on the mountain. There are two authentic mines where entrance is possible . It just opened to the public in August 2014.

There is no electricity inside two caves so tourists must bring a flashlight to explore inside. The trail up to the mountain is an experience on itself to discover the pristine nature of Doi Mok.

When you go to Doi Mok , you will discover the history of the old mine which was closed for 40 years ago after a holible disaster took place killed thousand of people. 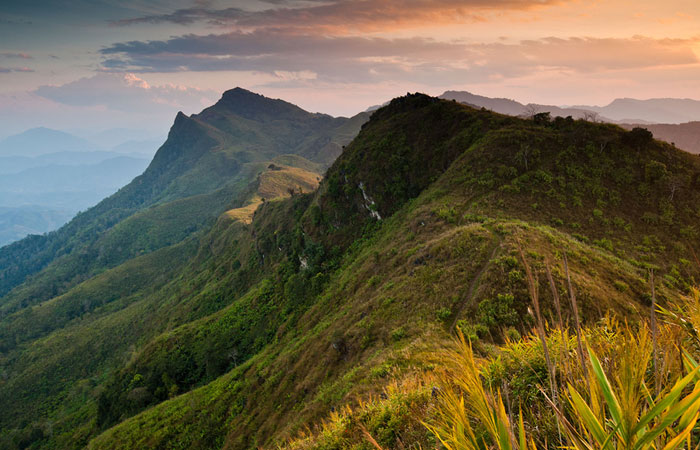 Doi Pha Tang offers the best spot to watch the scenic Mekong river at the hilltop where you overlook the borders of Thailand and Laos. Only 160 kilometers from the municipality and you can then enjoy your stay in your choices of bungalows or serviced tents, hugged by the sea of fog throughout the year. The blooming season when Siemese sakura blossoms is usually from December to January. The place is also home of many ethnics including Hmong, Yao and Chinese Haw whose ancestors were the 93rd Chinese Divisions migrated from China and created their community in Thailand. 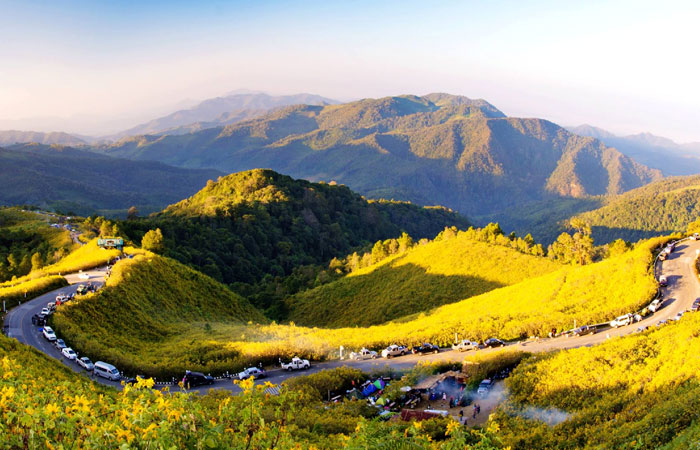 Approximate three hours drive along the Mae Chan-Ban Thoet Thai and Ban Huai In Routes, Doi Hua Mae Kham is home to many tribes who live on the mountain along the borders of Thailand and Burma with the main population being the Lisu tribe and small numbers of Akha, Hmong and Muser tribes. The best time to visit is November when the stunning sunflowers are in full bloom. 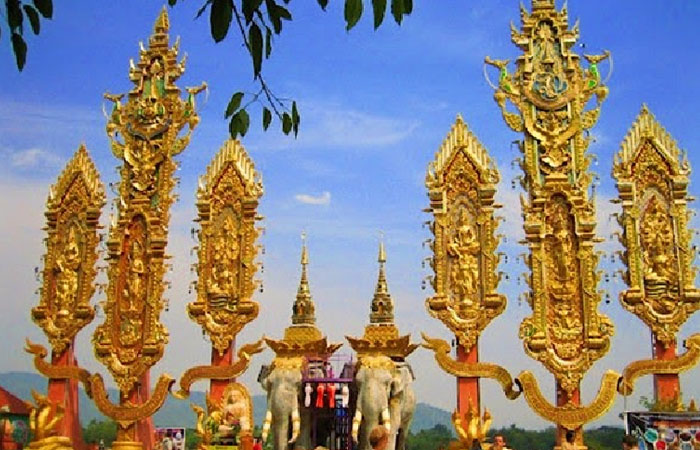 Visiting the renowned Golden Triangle is a must to complete the trip to Chiang Rai province! This is the famous location where the borders of Thailand, Laos, and Myanmar meet in the middle of the Mekong River. The Golden Triangle was formerly known as the world’s major producer of opium, which was later improved thanks to the works of the Royal Projects. Reaching the Golden Triangle where Thailand, Laos, and Myanmar join is easy as it’s only 9 kilometers north of Chiang Saen, by taking the road parallel to the Mekong River.

“Sop Ruak” is its nickname called by the locals, representing it is where Mekong and Ruak rivers join. It is also the birthplace of various legends of the Lanna culture. Boats services are available to enjoy the view upstream of the Golden Triangle and to cruise downstream to Chiang Khong. The journey to the Golden Triangle would take about 40 minutes and 1 hour is required to travel to Chiang Khong. Please be noted that the time duration may vary depending on river currents and water levels. 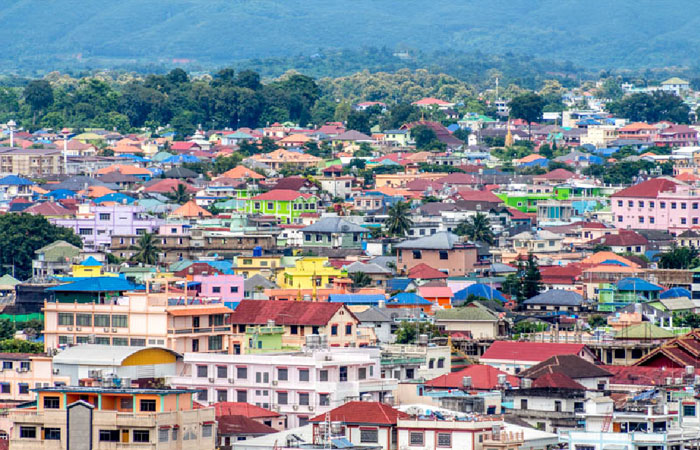 This Thailand’s north-most district is approximately 62 kilometers from Chiang Rai on Highway no.110. Serving as the border town with a bridge crossing over the Mae Sai River, connected with Myanmar’s Tha Khi Lek, Mae Sai is always busy with people crossing the borders, from locals making trades to tourists passing for traveling trips. There are also choices of tour services to nearby cities, such as Myanmar’s Chiang Tung that is approximately 160 kilometers to the north. 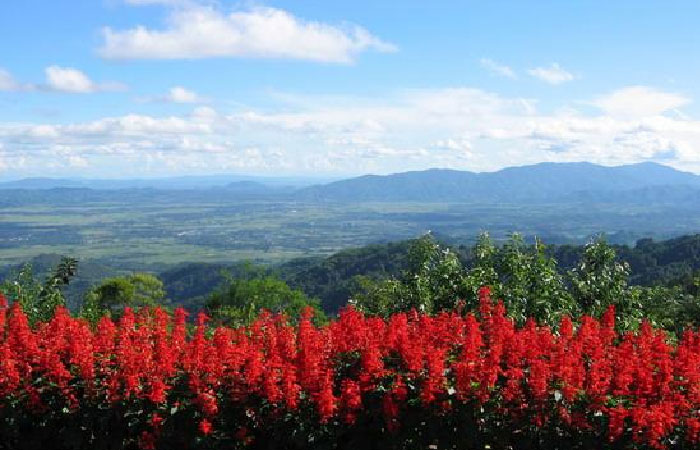 Doi Tung Royal Villa was built during the time Doi Tung Development Project was established, under the royal remark of H.R.H Princess Srinakarindra with her own fund. In December 1987, she moved to work here. This villa can therefore be counted as the first “home” of the Princess Mother.

Doi Tung Royal Villa was built on the hill, giving a terrific sight of the vast landscape. It features a combination of Lanna architecture (a northern Thai slab wood house with Kalae Top) and the Swiss-style Chalet. It was decorated with delicate woodcarvings in Mek Lai pattern, reflecting simplicity but also full utility. The villa has two floors, with a mezzanine. The highlight is the ceiling of the main hall, which portrays tiny lights representing the position of the constellations on the day the Princess Mother was born. Moreover, the simple-but-peaceful bedroom, and office of H.R.H. can be visited by tourists as well. However, photography isn’t allowed. The villa is embellished with a surrounded beautiful flower garden. There are also guides available to take travellers on a tour around Doi Tung Royal Villa area. It is open in rounds, each round takes 20 minutes. The villa is open everyday from 7 a.m.-5.30 p.m. The admission fee for general visitor is 90 Baht, for elders and students: 45 Baht (please present ID card as evidence). As for the admission ticket fee for entering 3 attractions: Doi Tung Royal Villa, Mae Fah Laung Garden, and the Hall of Inspiration, it costs 190 Baht for general visitors, and 90 Baht for elders and students. 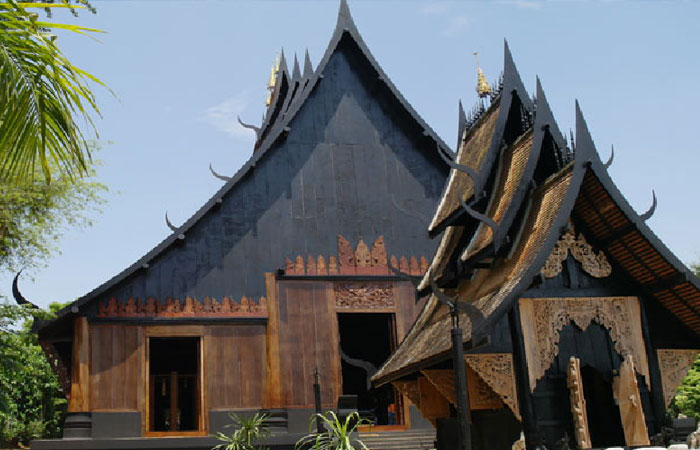 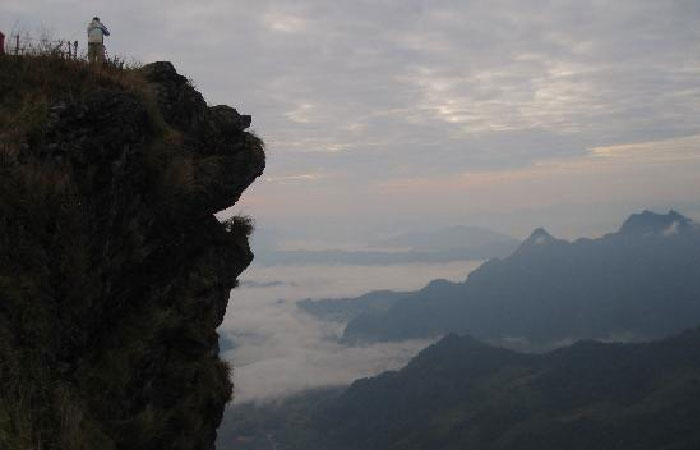 One of the most famous destinations uphill in Chiang Rai, especially during winter time, when visitors try to reach its cliff that offers spectacular views of the valley and sea of mist at sunrise. Phu Chi Fa is blessed with breathtaking views, abundant flowers of all colors, and cool weather most of the year. Plus, it is not far, located approximately 25 kilometers south of Doi Pha Tang in Thoeng District. Visitors are also welcomed to stay overnight at Ban Rom Fa Thong and Ban Rom Fa Thai. 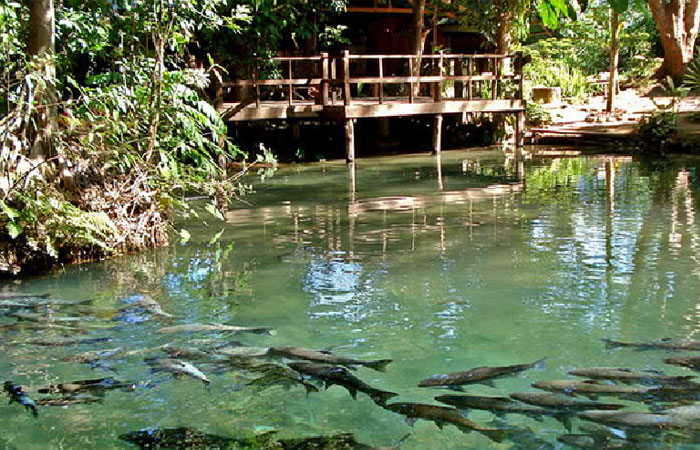 2. Tham Pum This cave stands atop the hill, but the steps ascending to the cave is not too steep. Right above the entrance of the cave stands a 200-year-old sculpture of a mythical lion. The cave contains stalagmites that look like Thai decorative pattern known as Poom Khao Bin, and for this reason the cave was named Tham Pum. If you keep walking for 60 meters, you should see a cliff on your right-hand side. The cliff, measuring approximately 3.80 meters high and 1.50 meters wide, features a beautiful stalactites hanging from the roof just like the flows of cascade. If you continue for 28 meters, you will find the path divided. Turn right to admire a natural well with crystal clear water. The well has a diameter of 10 meters and is commonly

referred to by locals as Bo Namthip (a well of nectar). If you proceed for 110 more meters, there are white and dazzling stalagmites and stalactites. At the end of the cave sits a prominent Buddha image to venerate. 3. Tham Saohin Phayanak is the final stop for this cave tour. It is located not far from Wat Tham Pla and Tham Pum. Visitors can get an access either by land or by water. In case you go there on foot, head south and use the path along the water reservoir. Tham Saohin Phayanak features tubular stalagmites that pile up until they resemble pillars, and for this reason Tham Saohin is the name given to the cave. The ceiling of this 3-storey cave has an opening chamber, giving beauty glistering reflection every time the sun shines on these stalagmites. To reach the 2nd and 3rd story of the cave, rock climbing skills are required. Therefore, this cave is suitable for adventurers and thrill-seekers. For your safety, please bring useful equipments for cave exploration.

How to get there: From Mae Chan district towards Mae Sai district, drive along Highway No. 10 and turn left at the intersection between KM. 877 – 878. The entrance is at Ban Tham market. There is a sign post saying Wat Tham Pla (temple) is 1.5 kilometer away. Keep going, the temple is located at road’s end. Tham Pla is on your left and is about 100 meters away from the parking space. 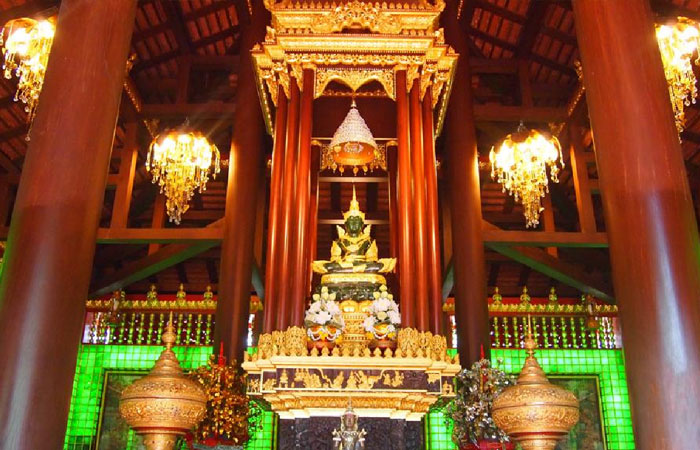 Wat Phra Kaew on Trairat Road is one of the most renowned temples of Chiang Rai as it was where the sacred Emerald Buddha had been enshrined since 1444 before it’s been relocated to Wat Phra Kaew in Bangkok, with few stops at Lampang and Vientiane. Wat Phra Kaew now enshrines an official replica of the Emerald Buddha made of green jade. The temple also houses a 700-year bronze statue of Phra Chao Lan Thong in the Chiang Saen style ubosot you hardly find elsewhere. 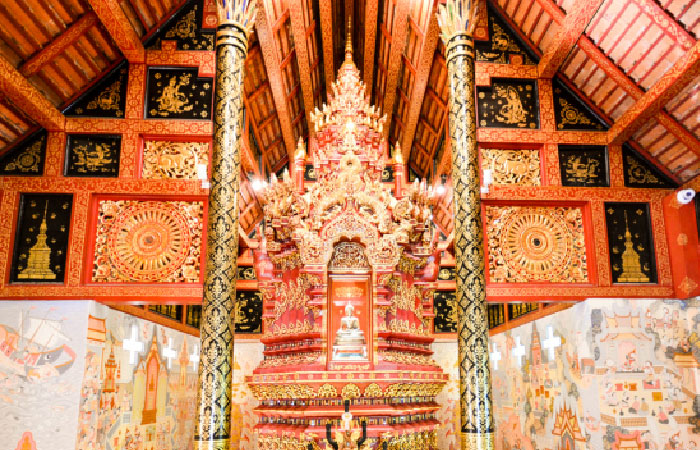 Not far from the Chiang Rai town hall is Wat Phra Sing, a historic temple once home to the sacred Lanna-style Buddhist statue Phra Buddha Sihing, which is now in Chiang Mai. Nevertheless, Wat Phra Sing remains a temple worth visiting for its Lanna-style ordination hall featuring finest creations of lanna craftmen.