Myanmar (Burma) The Golden Land is simply amazing. Myanmar, formerly Burma, is now more politically relaxed. The charms of both the country and the people are enormous. Myanmar is one destination where the local inhabitants make a difference. Not only are they friendly and charming but also considerate and engaging. Just observe the smiles. The country itself is immersed in the Buddhist religion which permeates everyday life, to be experienced on a Myanmar tour

The largest city, Yangon can be either viewed as a decaying city or can be a glimpse into a bygone era when colonial rule influenced everything. Everywhere, you will see wandering monks dressed in burgundy robes. The most outstanding landmark is the Shwedagon Pagoda. A pagoda is not an apt description; it is more a small city containing many pavillions and shrines, most decked in gold leaf. It sits on top of a hill and its jungle of spires can be seen everywhere. 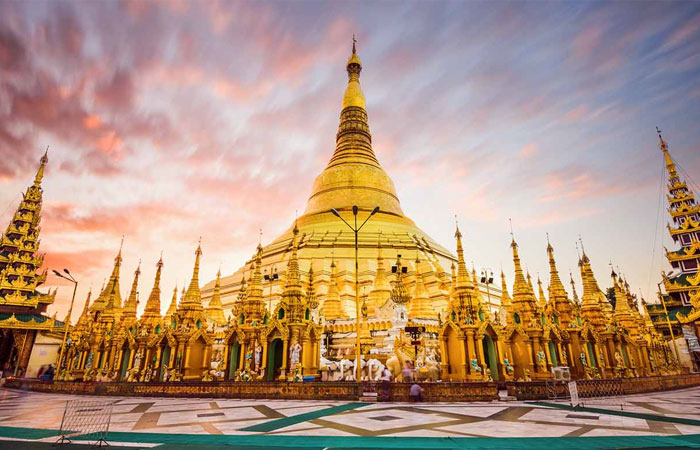 Yangon, the commercial capital, is the main gateway to Myanmar. Evergreen and cool with lush tropical trees, shady parks and beautiful lakes, Yangon has earned the name of “The Garden City of the East”. Yangon was founded by King Alaungpaya on the site of a small settlement called Dagon when he conquered Lower Myanmar in 1755

When you visit Yangon, visiting Shwedagon Pagoda is a must. It is one of the most famous and interesting place to visit in Yangon. Sule Pagoda lies in the center of Yangon and can be easily visited. Other than pagodas, museums such as National Museum, Bogyoke Museum and Gems Museum display historical events of Myanmar.

Bago is only 80 kilometer and about 1 hour drive from Yangon. Bago is one of the richest sites in Myanmar. Pyay lies 161 kilometers north of Yangon. The ancient ruins of the Pyu capital, Srikeshtra, lies in this city. Come and relax at the beautiful beaches of Chaung Thar and Ngwe Saung. Pathein well-known for the colorful Parasol. 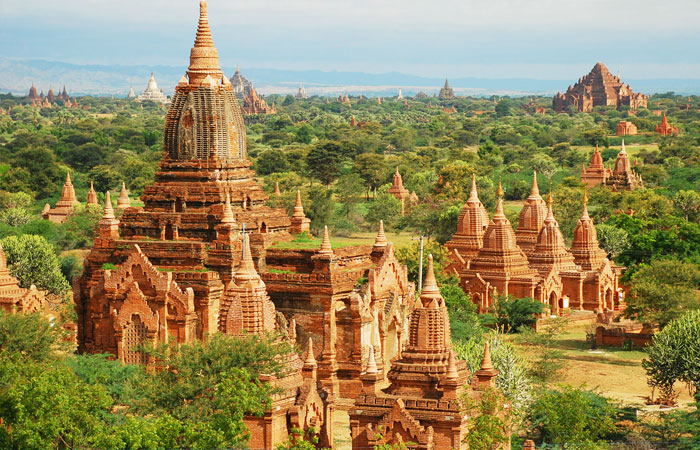 The main tourist destination in Myanmar is Bagan, capital of the first Myanmar Empire; one of the richest archaeological sites in South-east Asia. Situated on the eastern bank of the Ayeyawaddy River. The Magic of Bagan has inspired visitors to Myanmar for nearly 1000 years. Bagan is full of ancient architecture and ruins. Temples, pagodas, monuments, stone scripts, votive tablets, wall paintings, mural paintings, stuccos carvings can be found in many places in Bagan. The main 4 places to visit are Shwezigon, Ananda, Dhammayangyi and Thabbyinnyu Pagodas. 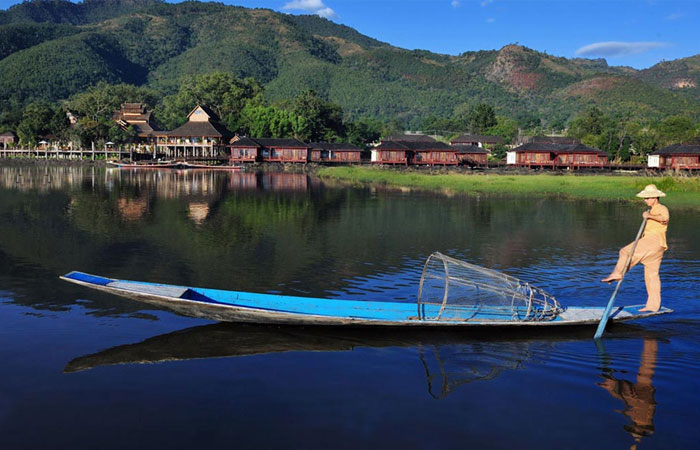 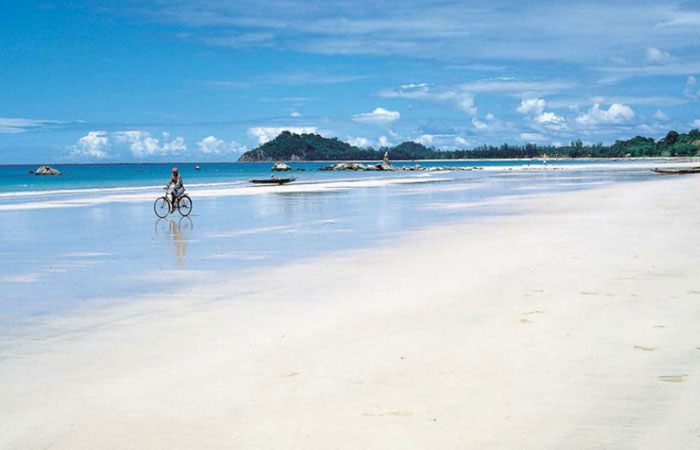 A small winding tarmac road snakes its way along the coast for about twelve miles from Mazin to Lontha, passing through Ngapali village, Shwewa Gyaing, Myabyin, Lontha and several other small villages nestling between the beaches and the hills along the coast. A golf course next to the road near Ngapali village is being upgraded. The road is also being widened, from two lanes to four lanes, and the airport will be extended to take bigger planes. A new terminal building has already been constructed. The private Mandalay Air and the government Myanmar Airways fly to Ngapali on alternate days throughout the week. It takes only 45 minutes flying time from Yangon.

After resting on the beach under the clear blue skies, the more energetic tourist or traveller has the option of exploring the range of hills behind the Strand Beach Hotel.Once you are on the small hills you will find a peaceful lake, which is actually a reservoir with blue waters where you can fish but not swim. In the winter months this lake is the haunt of migrating water fowls, wild ducks, teals and others which come down from the far north, beyond the borders of Myanmar. Ponies are available for riding along the beaches. Fishing boats with motors can be hired for trips to some of the islands off the coast or just to fish near the reef. Some travelers like to go on what is known as” side cars “, trishaws, peddled by local village men with two back to back seats for passengers at the side. Local buses ply between the villages and also to Thandwe, the district centre about seven miles away from the hotel. The best and cheapest way is to hire a bicycle to go around.

Ngapali is accessible by flight which takes about 45 minutes from Yangon, by car about 14 hours drive along the Rakhine Yoma mountain range. Ngapali has an international 18-holes golf resort, where you can relax. Ngapali Strand Beach Hotel has about forty-four single-storey bungalows, with comfortable two bed-rooms with bathrooms attached in each building. There are also three modern double -storey buildings. The hotel which first opened about thirty-five years ago is now being upgraded with modern facilities. If you are looking for a peaceful holiday with time to read and reflect, Ngapali with its lovely beaches is the place to visit. There you will find serenity and peace of mind amidst beautiful scenery. 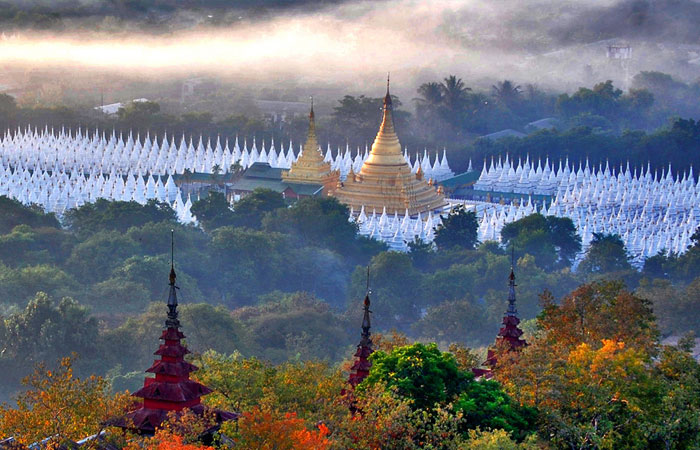 Mandalay is the second largest city in Myanmar and was established in 1857. It lies on the east bank of the Ayeyarwaddy River and in the upper part of Myanmar. Mandalay has the Royal Palace of the last Konbaung Dynasty. Mandalay inherits many cultural heritage from the ancient Myanmar Kingdoms and beautiful places to visit. Mandalay consist of five main townships namely Aung Myay Thar Zan, Chan Aye Thar Zan, Mahar Aung Myay, Chan Mya Tharzi and Pyigyi Tagun Townships. Mandalay Hill is a popular destination to visit while you are in Mandalay. The beautiful scene of the whole city can be seen from the hill. Royal Palace, Sanda Muni and Shwenandaw Monastery are a few more.

U Bein Bridge in Amarapura is a tourist destination near Mandalay. Across the Ayeyarwaddy River, on the west side, lies the Great Mingun Pahtodawgyi and Mingun Bell. Crossing the Ayeyarwaddy River is another exciting feature. Pyin Oo Lwin is the City of Flowers with rare species. Mogok produces the best gems in the world. 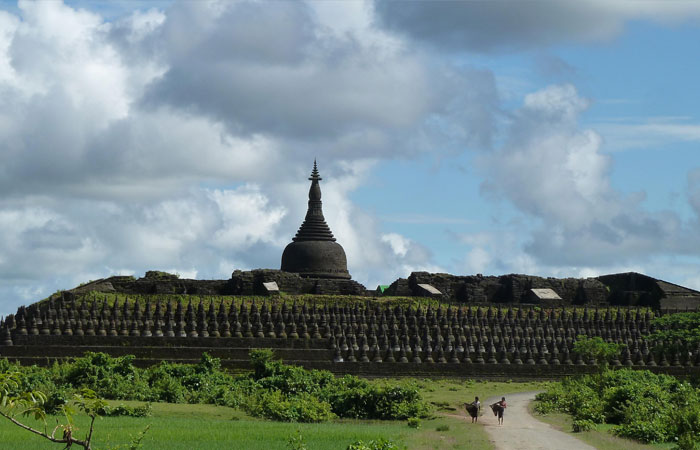 Largely unknown to the Western world for much of its tur­bulent history, Rakhine played a pivotal role in the exchange of cultures and religions between India and Southeast Asia. For over a thousand years the region which now forms the Rakhine State, Myanmar was an independent state whose rich history is only slowly being paid the attention it deserves

Sittwe is the Capital city of the Rakhine State, and Sittwe is situated on an estuarial island at the confluence of the Kaladan River, Myu River, and Lemyo River. Thandwe has the main airport to the Rakhine State. Kyaukphyu is another commercial town. The Ann Pass is an important trade route and rises to a height of 4664 feet above sea level. 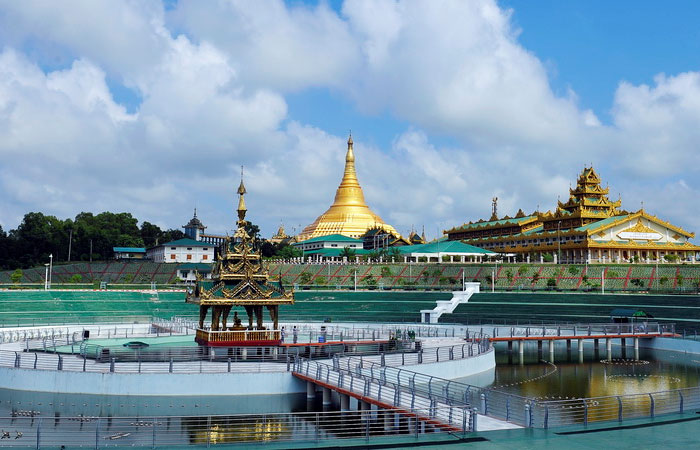 Naypyitaw is the administrative capital of the Union of Myanmar. Centrally located, it is 391 km from Yangon and 302 km from Mandalay, being easily accessible from all parts of the Union.

The City Hall (Nay Pyi Taw)
City Hall is one of the prominent Land Marks of Nay Pyi Taw, in which Nay Pyi Taw Development Committee establishes its headquarters which undertakes tasks for development of Nay Pyi Taw. State occasions are held with the accompaniment of the tune of National Anthem played by State Orchestra in Nay Pyi Taw City Hall. That indicates Nay Pyi Taw, administrative City of the Union of Myanmar.

Myanmar International Convention Centre (MICC)
It is located on 16 acres of land with 312, 000 square feet in Zabuthiri Township, Nay Pyi Taw. It was built by the People’s Republic of China and completed on 15 March 2010. The MICC has plenary hall that can accommodate 1900 persons. The MICC building is formed with listening rooms, holding rooms, meeting rooms, VIP summit room, news briefing room, singing room and the 720 persons capacity Banquet Hall.