Ubon Ratchathani is a large province in the Northeast of Thailand, dating back to more than 200 years old. Ubon Ratchathani has many interesting and beautiful places to visit such as Pha Taem National Park, which is famous for its prehistoric rock paintings, Sam Pan Boak or the Grand Canyon of Thailand, Huai Sai Yai Waterfall, one of the most beautiful waterfalls of Northeastern Thailand, Kaeng Saphuee Public Park, Wat Tham Khuha Sawan, and Wat Phrathat Nong Bua.For those who are enthusiastic about local festivals, the Candle Festival on Khao Phansa Day is the most important event of the province, in which huge and elaborately carved candles are paraded throughout the city.Popular souvenirs from Ubon Ratchathani include hand-woven cotton cloth, loincloth, silk cloth, folk pattern pillows, and brass wares. For food lovers, white pork sausage, Thai sweet sausage, and northeastern-style fermented sausage are the must try. 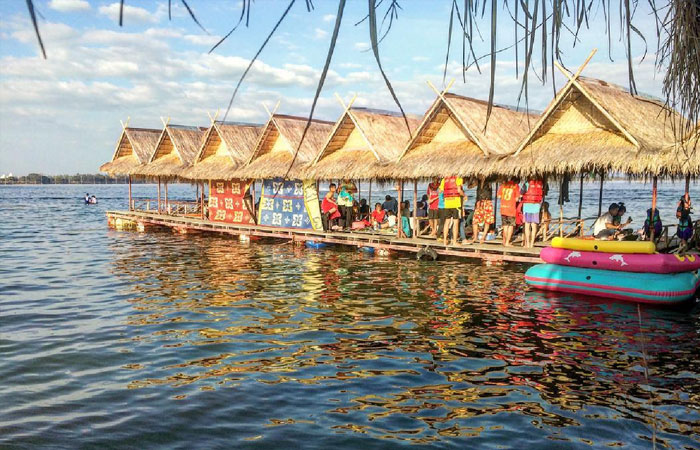 Sirindhorn Dam is a stone dam filled with clay. It is constructed to divide the Dom Noi River, which is a branch of the Mun River, at Kaeng Chae Noi in Chong Mek Sub-district, Sirindhorn District, Ubon Ratchathani Province. The establishment started in 1968 and finished in 1971. It is currently under the responsibility of the Electricity Generating Authority of Thailand. Apart from its advantage to produce electricity, Sirindhorn Dam is also an important tourist attraction in Ubon Ratchathani Province. Sirindhorn has a very spectacular scenery. The main activity here is undoubtedly admiring the view of the dam above its ridge. Besides, inside the dam, there is “Sirindhorn Garden,” which the Electricity Generating Authority of Thailand built to glorify Princess Maha Chakri Sirindhorn in the occasion of her third round birthday anniversary in 1990. Sirindhorn Garden is situated on the left side of the dam ridge, next to the reservoir. The area covers around 40 Rai. It is generally shady with large and small plants and is a suitable place for relaxation. Inside the garden, the interesting things are the sculptures of 3 elephants, playing the Thai xylophone, fiddle, and flute. These three are the princess’ favorite musical instruments. At the garden, there are poem inscribed at many places for the visitors to search for. Other services which Sirindhorn Dam provides for the tourists are restaurants, accommodation guaranteed by the Electricity Generating Authority of Thailand, and golf court for those who are interested in playing sports. 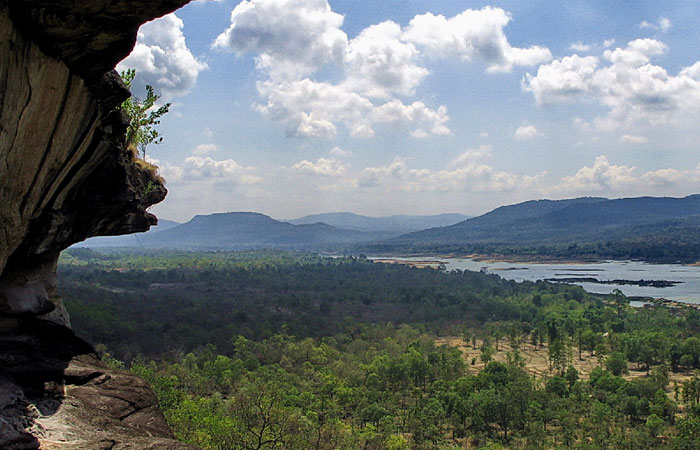 this National Park features the plateaus, hills, deciduous dipterocarp forest, sheer cliffs resulted from the earthquakes, irregular shaped of sandstone which scattered around and the beautiful wild flowers growing among the rocky ground. Highlight of the Park are Pha Taem and Pha Kam which located near the National park headquarters. Surface of the cliffs are filled with numerous prehistoric cave paintings dated back 3,000-4,000 years ago that explores the traditional way of life of people who once lived here during the prehistoric days. Scenes in paintings include fishing, rice farming, human figures, animals, hands and geometric designs. As a result, Pha Team becomes one of the world’s oldest agrarian communities and given Ubon Ratchathani be cradle of Northeastern civilization. Also, the site recently discovered more archaeological evidences suggested that human settled in this area between 14,000-6,000 years ago. 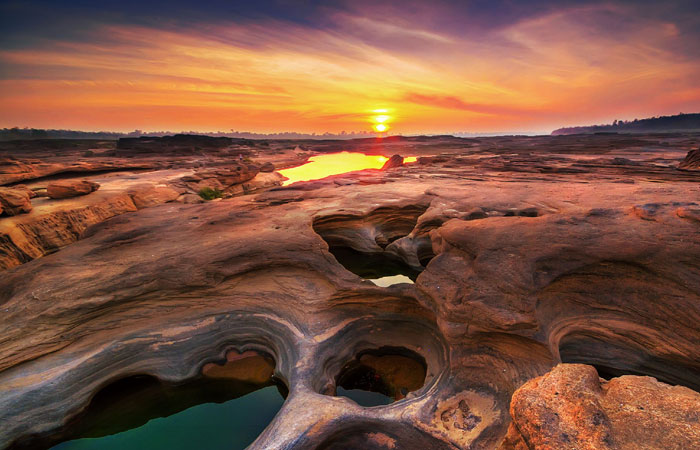 Sam Phan Bok is a large rock islet in the Khong River. During flood season, this islet will submerge under the water. It is eroded by eddy current, resulting in more than 3,000 (pronounced Sam Phan in Thai) small basins or Bok (“Bok” in Lao language means “basins”). This is the history of the name “Sam Phan Bok.” Owing to the large number of basins, this place is dubbed as “Grand Canyon of Thailand.”

In drying season, Sam Phan Bok will emerge from the water and become an amazing natural wonder in the middle of the Khong River, giving the opportunity to the tourists to admire the beauty of indented rock islets eroded by water current. It is like an artistic picture with the shapes of circle, oval, star, etc., depending on individual’s imagination. This kind of atmosphere can be experienced only during January to April.At the entrance of Sam Phan Bok, there is a stone whose shape is like dog head. Legend has it that a child of Naga, who lived in the Khong River, wanted to dig a water channel to create another waterway. He assigned a dog as a guard during the excavation until it was dead and finally became a stone. 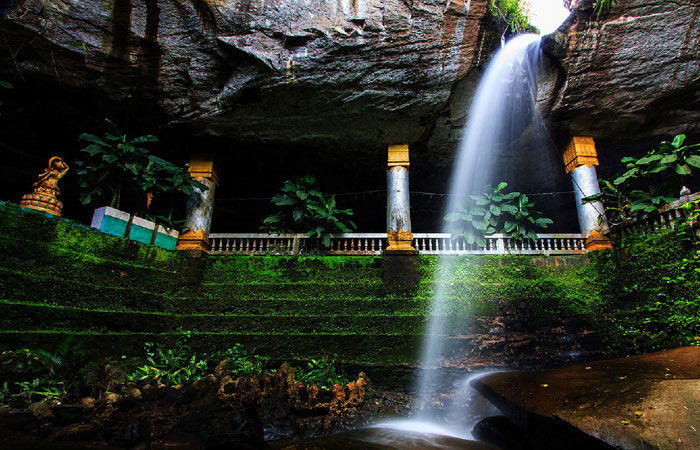 The cave installing the sleeping Buddha’s image is tranquil and is a meditation retreat. It is advisable that tourists should not make any noise. Around the temple are large rocks in tandem with one another, seasonal colorful trees and flowers. Moreover, a waterfall in front of the sleeping Buddha’s image makes a scenic view as they fall down to the abyss, giving shady atmosphere. In the end of rainy season, there is a great amount of water. Above the cave is a beatific and abundant meadow field. 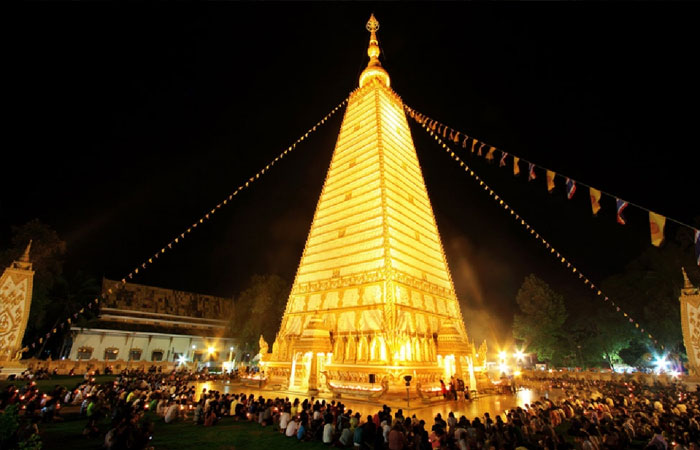 Wat Phra That Nong Bua is a Dhammyuttika temple, one of important temples in Ubon Ratchathani. The highlight of this place is Sri Maha Pho Chedi which was built in 1956 to honor of 2500 years of Buddhism. The gleaming gold and white chedi at this temple loosely resembles the Mahabodhi stupa in Bodhgaya, India. The old stupa with 5 meters wide and 1 meters high is now housed by the new 55-meter stupa square base. It stands in the middle of a marble slabs square, with smaller stupas at each corner.

Around this elements there are other less notable buildings including a large recent ubosot with large round windows and a sitting Buddha at the front.

Today, Wat Phra That Nong Bua is where Buddha relics are stored. Visitors can come and pay respect and experience peaceful environment for meditation.